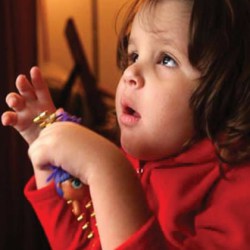 Autism is a disease of the brain wherein the brain perceives and interprets things differently from the normal. Due to Autism the people are unable to interpret things as they are like taste, smell, behaviour, relationships, communication etc. Hence, they face difficulty in performing daily routine activities and are often said to live in a world of their own.

Some common symptoms which a person affected with Autism demonstrates, are discussed below.

The people affected by Autism have great difficulty in developing communication of the non verbal variety. They fail to form different postures of the body and have fixed facial expressions.

People affected with autism also are unable to gaze into another’s eye and maintain eye to eye contact with other people.

Autism affected people also face great difficulty in performing daily verbal communications with other people. They have great difficulty in learning to speak and sometimes people with Autism do not speak at all. These people are unable to carry out conversations and often loose tract of what is being told in the middle of a conversation. These type of people often take the meaning of the word literally and fail to read in between the lines or understand humor or sarcasm.

People suffering from Autism often keep on repeating one sentence or word again and again, as if memorizing them. This repetition of word or phase if often something they have heard in the past and looks like they are committing it to memory.

Limited or Lack Of Interest

Person affected by Autism exhibit and acute lack of interest in any particular activity. They are unable to be understand and share joy in achievements of others.

Even if they start showing curiosity or interest in certain thing, it is usually for a very limited period of time and they soon loose interest in it.

People suffering from Autism often have lack of empathy. They fail to understand the others point of view and are thus unable to relate to them. The people suffering from Autism face difficulty in understanding the feeling of pain and joy in others. Children affected with Autism do not like people cuddling or holding them and tend to get irritated and cranky when the same is done.

The same if applicable for video games, playing cards, licence plates of the cars etc.

The people who are affected by Autism, often tend to do things in a sequence or order. They like doing things same to same as is done in daily routine, like- following the same route while travelling etc.

These people like to do all activities alone like playing, studying etc. Autism people do not like working in groups and do not ask for help when they are stuck.

Warning: count(): Parameter must be an array or an object that implements Countable in /home1/quickezweightlos/public_html/wp-content/plugins/ultimate-author-box/inc/frontend/uap-shortcode.php on line 119
style=”display:none;”>

admin Administrator
Hi, This is Admin of the site. We are working hard to improve the content. Please share your suggestions and content if you have.
email
quickneel@gmail.com
×

admin Administrator
Hi, This is Admin of the site. We are working hard to improve the content. Please share your suggestions and content if you have.
email
quickneel@gmail.com

6 Tips For Getting in Shape While Unemployed

Diet and Exercise Tips For the Ectomorph Body Type